Woman Wonder: “The Trojan Women,” at Lincoln Park through July 16 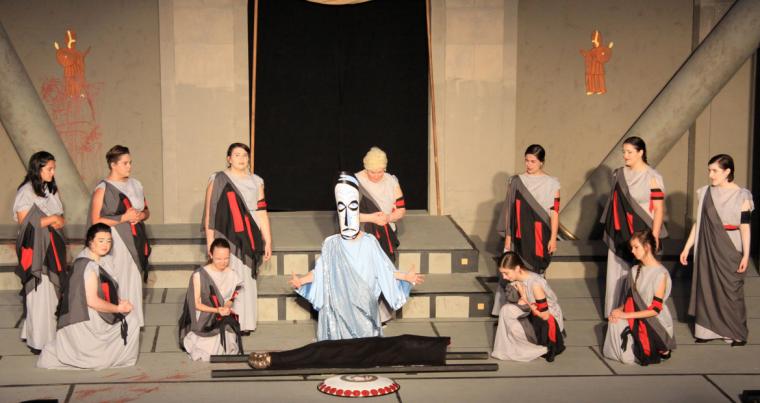 Melita Tunnicliff and ensemble members in The Trojan Women

As stage bummers go, The Trojan Women has always been one of the most glorious – an astoundingly eloquent and affecting anti-war argument that plumbs depths of almost immeasurable sadness. Yet as Genesius Guild’s current presentation of the Greek tragedy reminds us, Euripides’ play can also deliver a fantastic amount of joy, at least if you, too, annually wish that Guild offerings gave their female participants a little more to do.

This isn’t a knock on Guild; classical theatre is heavily male-centric by nature, and the organization has long maintained a stance against reverse-gender casting. (Whether it still should is a question for another time.) Yet while Lincoln Park’s seasonal masked dramas generally guarantee a sizable ensemble of women in the Chorus – this one boasting an assemblage of 11 led by Faith Douglas’ Choragos – not even Antigone, Electra, or Medea offers the breadth and variety of female roles that The Trojan Women does. The achingly bereaved Hecuba, the increasingly anguished Andromache, the vengeful goddess Athena, the mad and desperate Cassandra, the cunning, wickedly resourceful Helen ... . These are spellbinding characters that offer hearty acting opportunities, and when director Dori Foster’s production is at its best, you watch their portrayers and the omnipresent Chorus with a keen attention that’s inseparable from delight.

I’ll admit that, on Sunday, I was occasionally left wanting even more stage passion than we wound up getting, particularly in light of some early, accidental synchronicity when Mollie Schmelzer’s Athena told Bob Hanske’s Poseidon, “I need your help in my revenge,” and the line was punctuated by the nearby roar of an exploding firework. (This unplanned, perfectly timed moment made our audience chuckle, as it seemed to hint at thunderous emotionalism yet to come.) The masked actors did an overall fabulous job of projecting from behind their headwear, and intent and meaning were consistently clear. Yet with only a few exceptions, even the more assured castmates would have benefited from hiking up the verve in the material, especially physically. As beautifully designed as mask artist Comet Blecha’s contributions are – with the blood-red eyes of Mischa Hooker’s compassionate messenger Talthybus a superb detail – they can only do so much in suggesting the deep wells of feeling in Euripides’ damaged figures. For that, Trojan Women requires actors who take their characters’ suffering and anger and vivacity practically to the breaking point, as masked drama is the rare theatrical genre in which performers almost can’t go “too big.” 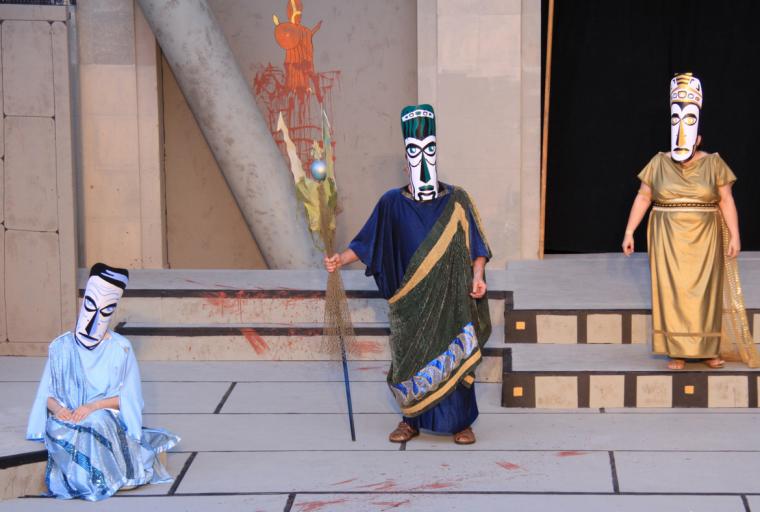 Melita Tunnicliff, for example, does a marvelous job with Hecuba’s wailing lamentations, conveying the dethroned queen’s sorrow through her tormented readings and the slight angle at which she routinely positions her head, as though the weight of the woman’s despair precludes erect posture. Yet as terrific as Tunnicliff is, she could still stand to be less recessive and more outraged at the fates that have befallen Hecuba and her fellow citizens of Troy. Scenic designer Earl Strupp’s minimalist set is one of the more memorable among recent Genesius Guild offerings; with its collapsed columns and walls, steps, and floor spattered with blood, it’s impossible for the play’s characters to escape memories of the Trojans’ horrific defeat at the hands of the Greeks. Yet lingering hatred toward them is too often missing, and without a strong sense of pulsating resentment from Tunnicliff’s Hecuba, the similarly touching Kathy Calder’s Andromache, and numerous Chorus members, we miss a central point of Euripides’ text: that women are capable of staggering strength in the face of unfathomable circumstances. These widows of Troy are certainly broken, but they haven’t been destroyed.

Still, Foster and her cast get so much right that it feels almost churlish to ask for even more. Calder’s agony over the condemnation of her young son Astyanax (played on Sunday by Mathias Miles, who alternates performances with Leo Braddy) is devastating, and Schmelzer and Hanske – the latter making satisfying “thump!”s with Poseidon’s scepter – open the production on vocally commanding notes. The subtly moving Hooker finds his opposite in T.J. Green’s haughty, imperious Menelaus, whose arrival is a textbook example of how to simultaneously make an entrance and make an audience snap to attention. In a perfect world, the presence of frequent Guild performer Andrea Braddy would be mandatory for all of the organization’s Greek tragedies, and she’s a spectacular Cassandra here, throwing herself into the demanding role with vocal gusto and sublimely expressive physicality. And while I’m usually averse to the practice of directors directing themselves, I’m happy to make an exception for Foster, who assumes the role of the wily Helen with slinky, hateful aplomb. 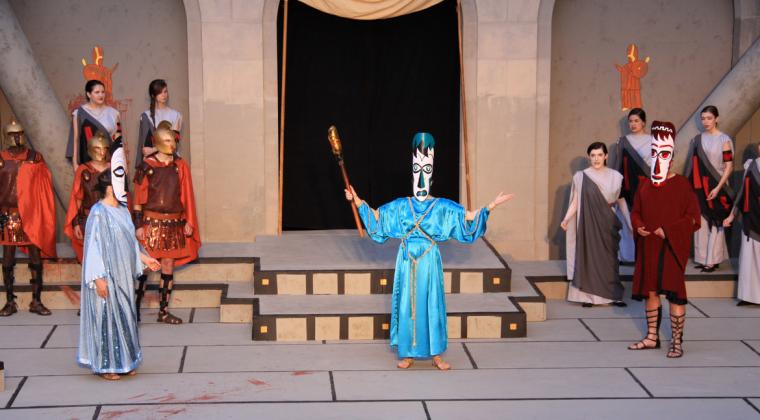 As for the Chorus, it finds Douglas’ Choragos orating and reacting alongside Kaylee Gundling, Emma Hanson, Kyah Johnson, Sophia Kilburg, Gillian McMahon, Katie Phillips, Sue Staley, Elena Vallejo, Mercedes VanOpdorp, and Zoe Yates, all of whom come alive in their individual and group recitations. (The ever-wondrous costume designer Ellen Dixon does perhaps her finest work with this collective, whose mass entrance in their light-gray dresses with sashes of darker gray, black, and red stripes – and with armbands to match – was a true “Whoa!” moment.) It’s time, however, for my nearly annual reminder that just because you’re not speaking doesn’t mean we’re not looking at you, as a few of the ladies appeared distracted and even a little bored when not talking, and one took a few seconds to extract a bug from her teeth. (An understandable gesture, to be sure, but one that could also have been accomplished less obtrusively.) All told, though, the Chorus on Sunday was effective and highly watchable, and if a couple of the performers seemed to be going noticeably above and beyond in their responses to the stage action, they really weren’t; they were merely expressing, properly, Euripides’ overwhelming cascades of grief.

With Brittney Cox supplying suitably dramatic music cues and Andy Shearouse creating an especially haunting lighting effect on the Chorus’ final exit – a dimly lit suggestion of ineffable sadness and resignation – Foster’s The Trojan Women is a thoroughly engaging experience rich in striking tableaux. And speaking personally, I can’t thank Genesius Guild enough for scheduling the production when it did, as the performance landed on the same day I returned from a vacation that concluded with a nine-hour plane flight and my being awake for roughly 32 hours straight. If there’s any better cure for jet lag than quality theatre in the park that runs just under an hour, I’m not sure what it would be.