You Don't Know Jack: "Gaslight," at the Timber Lake Playhouse through August 21 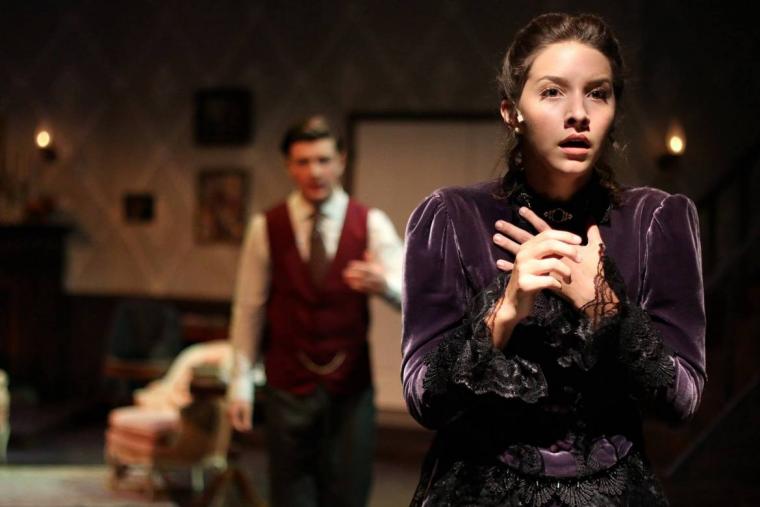 The psychological thriller Gaslight, written by Patrick Hamilton, first premiered in London in December of 1938, and then enjoyed a long run on Broadway, beginning in 1941, under the title Angel Street. Its story centers on Jack and Bella Manningham, an upper-middle-class married couple who have recently moved into a new home in the Pimlico district of London circa 1880. As the show begins, it's apparent that this is not a very harmonious relationship, as Bella is quite clearly on the verge of some type of emotional breakdown. Her cognitive distortions appear to be the result of her overbearing husband, who is controlling, demanding, and torturous in his teasing, dangling emotional carrots in front of Bella and then cruelly pulling them away. (All the while, he overtly flirts with the female hired help.) Every evening, Jack leaves the residence, and sends Bella to her bedroom, where she hears strange noises on the floor above her room, and the gaslights that illuminate the home dim shortly after Jack leaves, always glowing brighter 10 minutes before his return. Yet everything Bella sees, hears, and experiences, according to Jack, are only figments of her inner madness. All she needs, he tells her, is to take the medicine he provides, and trust in him to know what's best.

Portraying the emotionally broken Bella, the center of Gaslight's plot, is Melissa Weyn, who appears to do everything she can to keep from coming totally unhinged. Weyn has mastered the employment of her fingers and hands for nervous flicks and tics, illustrating the overwrought inner struggle that Bella is fighting, and her hollow yet manic gaze supplies the audience with enough anxiety to make one's neck hair stand at complete attention. As Jack, Kieran McCabe plays the role rather coldly, and even aloofly. He might be more effective if he'd give the character more gears in his motivational gearbox; by offering more nuance within Jack's teasing, flirting, and desperation, McCabe may have brought a more disturbed character to life.

From the outset of the play, the audience is well aware that Jack is our villain. (Where does Jack go at night? Why is he so harsh toward Bella?) But they're also aware that something supernatural appears to be taking place. (How do books seemingly fly off the shelf? What's up with the gaslights flaring up and dimming down?) Enter Ken Singleton as Sergeant Rough, a London detective who has been on a 15-year mission to solve a murder that happened in the very home the Manninghams now occupy. Singleton shines a very bright light on the storyline, and on the stage. His detective is at times comical, but also calculating, as he slowly unveils key plot points answering question after question, and signals to Bella (and the audience) that she'll eventually be freed from the grips of this Victorian thriller.

In the supporting roles of housemaids Nancy and Elizabeth, Olivia Kaufmann and Shaina Schrooten are calculating as they play two very distinct sides to each of their servants. Kaufmann's Nancy is shrewd and sensual as she toys with Jack as a potential accomplice, and inserts herself right in the middle of the Manninghams' marital bubble. Schrooten, meanwhile, made a fool out of me, as I was surprised to learn that Elizabeth was more than the stereotypical dowdy Brit I thought she was.

Gaslight's entire story takes place in the main sitting room of the couple's home, a set designed by Tucker Topel with lighting by Riley Wood and sound by Kevin Johnson. Topel, Wood, and Johnson must have worked together very closely to create an environment that was beautifully Victorian in its look, but that kept the audience on edge with its shadowy and haunting feel.

Director Cody Jolly guides Gaslight to a quick pace that boasts just enough surprises; some audience members, on Thursday, actually gasped at several well-timed points throughout the evening. And the fun part about the show is that it's quite smart without becoming a typical horror story – it's truly about the thrill, with no horror needed. An intelligent thriller, Gaslight is destined to leave you on the edge of your seat as you try and follow the sick, tortured path of this play through its own very dark and stormy night.

Gaslight runs at the Timber Lake Playhouse (8215 Black Oak Road, Mt. Carroll) through August 21, and more information and tickets are available by calling (815)244-2035 or visiting TimberLakePlayhouse.org.