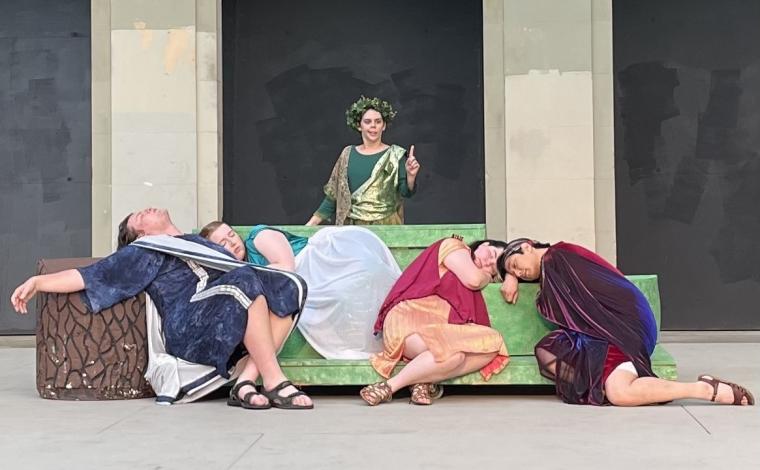 William Shakespeare’s A Midsummer Night’s Dream is one of those plays whose audiences are at least vaguely familiar with. Clearly, familiarity pays off, as Sunday’s performance was about as packed as I’ve ever seen at a Genesius Guild performance. And what a great night to come out and experience what the company had to offer, because director Jeremy Mahr and his cast delivered quite a lighthearted night. There was a fairly decent, soaking sun shower about 45 minutes before show time, but Guild had towels at the ready, wiping down both the stage (designed, by Riley Scranton, to look like a forest) and the seats. Needing so many seats is a good problem to have, but admittedly, the rows have been uncomfortably bunched together this season. If this may deter you, though, bring your own lawn chair and sit a bit further back. Mahr’s cast is certainly up to the challenge of being heard, and you won’t feel like a sardine.

Sitting in the grass won’t have you missing out on the whimsy of this fan favorite, either. Before the show began, the cast's fairies were playing around with bubbles and making other mischief accompanied by a most interesting soundtrack. (Google tells me the genre is called “Bardcore,” which is basically pop music with a Renaissance spin; I rather appreciated it.) And Mahr’s cast involved a lot of doubling up on roles, but visually, this makes complete sense thanks to great costuming by Shannon Ryan and her assistant Courtney Wehmeier.

In case it’s been a minute since you’ve read or seen A Midsummer’s Night Dream, it’s a comedic play primarily about romantic love: Theseus (Joe Sager) is set to marry Hippolyta (Sarah Willie), the Amazon queen. Lysander (Calvin Vo) and Hermia (Cayla Odendahl) are in love and decide to run away because her dad is trying to force her to marry Demetrius (T Green). And poor Helena (Emma Hughes) loves Demetrius.

Insert the fairies: Oberon (Sager again), king of the fairies, tells Puck (Mattie Gelaude) to put a potion in the eyes of Demetrius and Titania (Willie again) so that they both fall in love with the first person they see. Only Puck puts the potion into Lysander’s eyes as well, and both gentlemen fall in love with Helena, who thinks they’re making fun of her.

Also in the forest is a band of actors preparing for the Theseus/Hippolyta nuptials. A feisty Puck gives one of the thespians, Bottom (Ben Graham), a donkey’s head, and when Titania awakens, she falls in love with him. So those are the major plot points covered, and while it looks confusing written out like that, I can assure you, in context, it all makes sense.

I don’t know who cut the script down, but whomever was responsible did a marvelous job, keeping in everyone’s best-loved lines but also occasionally updating some language to drive home a point. Mahr’s entire company did an expert job of getting to the meat of the production, while keeping the evening well-paced. And oh, my gravy, did they deliver on the revered comedic aspects through the production. Graham’s exuberant delivery particularly, beautifully stood out, and Gelaude’s grin was so perfectly Puck-ish that I couldn’t imagine how the role might have been better cast; Gelaude also seemed to just be having a gay old time of it. As it happens, Puck wasn’t nearly as annoying as I remember the character being. In truth, this Puck turned out to be incredibly charming.

Among many wonderful moments in this production there was a flowy dance sequence with scarves, and – oh my goodness – Michael Carron just stole the scene with his blatant disinterest in the dancing. His halfhearted following of Lily Blouin’s choreography was funny enough on its own, but throw in his scowl and major eye roll, and I was rolling with laughter.

Also funny: the sheer height difference between Green and Vo and Hughes and Odendahl made for excellent physical comedy. And these four actors played off of each other brilliantly, especially as the gentlemen fought over Helena’s love while Hermia grew increasingly more frustrated. Oh, and there was a mysterious pied-piper goblin, excellently played by Erin Mahr – what a flutist! I’m perhaps doing a disservice to Josef Bodenbender, Mischa Hooker, Angela Rathman, and Erika Seabloom in this review – although I don’t mean to, because the Midsummer company at large was truly wonderful while bringing the show to life. But I don’t get to blather on forever. Just trust me: They’re good.

Meanwhile, you may think that by the time everyone is back together with their rightful partners, plot-wise, that would be the happy ending to the evening. But no: There’s still the matter of this play that A Midsummer Night's Dream's band of actors has been preparing. And you’ll be really glad Mahr kept it in the show, because if you’ve never had the pleasure of seeing Carron play a wall, you are really missing out. Mahr also extends the fun all the way through curtain call, because the flute version of Hall & Oates simply demands a dance number, don't you think? This is rather on-the-nose to say, but don’t let this enchanting production pass you by like a summer’s dream.