It's a small movie, but the scope of John Singleton's Baby Boy is enormous; the film is nothing less than a critique of young African-American males, a warts-and-all look at the infantilization of those who consider themselves true men. Singleton received great acclaim a decade ago for his writing/directing debut, Boyz N the Hood, and while his take on Shaft last summer was an enjoyably over-the-top romp, Baby Boy is his first work to make good on the promise he showed in 1991: The movie is superb. Where nearly every scene in Boyz N the Hood was filled with dread and the threat of violence, the images in Baby Boy are steeped in sadness and resignation, with exquisite moments of joy, fear, and strength throughout.

Jody (Tyrese Gibson), a young man living in South Central Los Angeles, has fathered two children with two different women yet still lives at home with his mother, Juanita (A.J. Johnson). Unemployed, Jody enjoys his life of ease - romancing his girlfriend (Taraji P. Henson) while cheating on her, hanging with his equally carefree buddy (Omar Gooding), and remaining the number-one man in his mother's life - until Juanita brings home a live-in lover, Melvin (Ving Rhames), whose violent past and adoration of Juanita makes him a threat to Jody. Suddenly, this "baby boy" is forced to take responsibility for his actions and leave the nest; as Singleton shows, that path is tortuously difficult in a society that provides status and easy money for those who refuse to grow up.

Visually, Baby Boy is Singleton's most accomplished picture. It opens with a shot of twentysomething Jody in his mother's womb, a simultaneously fascinating and disturbing image, but Singleton pulls off more subtle effects with equal ease; there's a marvelous shot of Jody standing between Juanita and Melvin, and when Melvin leans in to kiss her, Jody all but disappears. Singleton's gifts with visuals are matched by his remarkably conversational dialogue, both subtly poetic and true-to-life, and his grace with the performers. Gibson, Johnson, and Henson are all extraordinary, creating vivid portraits of flawed but generally decent human beings, and as Melvin, the dynamic Ving Rhames is perfection. He doesn't have a lot of dialogue, but Melvin is the epicenter of Singleton's universe: a man who's seen it all, and can only hope that Jody learns life's harsh lessons without making the mistakes he did.

None of this begins to indicate how entertaining the film is, too. Much of the film is sadly, devastatingly funny - witness Jody's attempts to lead the straight life as a "salesman," selling stolen dresses to women at a discount - and Singleton shows enough hope in his characters that the ending is a tentative embrace of life. Baby Boy is that rare summertime treat, a movie with the guts to say something important and, in a happy moment of alignment, say it magically well. 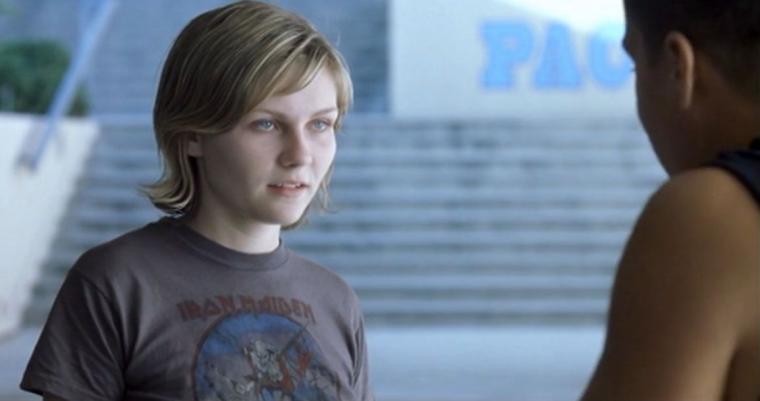 Kirsten Dunst is so smashingly good in crazy/beautiful that the movie itself can't possibly match her. For the first 45 minutes, however, it sure tries. Dunst plays Nicole, a wealthy good-time girl who lives a wild, reckless life of partying, blowing off classes, and taking the world by storm; if it weren't for the questionable prescription drugs we see her ingest in the morning, she'd appear to have it all. She meets a high-school classmate, Carlos (Jay Hernandez), who is a Latino A-student from the wrong side of the tracks, and before you count the number of star-crossed clichés the leads embody, they're all over each other, damn the consequences. crazy/beautiful details the economic, social, and psychological differences they'll have to overcome to stay a Hot Couple.

If you think you've already seen this movie, you probably have. There's not a plot development you can't see coming, the characters are typical (Nicole's dad, played by Bruce Davison, is a liberal congressman who hides his affection for her, and her stepmom, Lucinda Jenney, is a hypochondriacal snoot), and there are so many music-video-esque montages of the leads happy, the leads sad, the leads lonely, et cetera, that the film begins to resemble an MTV greeting card. Director John Stockwell doesn't display much in the way of cinematic ingenuity, but in his defense, the first near-half of crazy/beautiful is pretty terrific. The scenes of the leads circling around each other have an unforced, electric rhythm, and Nicole has been given a best girlfriend, vibrantly played by Taryn Madding, who is so funny and unique that you wish a whole movie were devoted solely to her. Jay Hernandez, too, is beautifully cast; he has real acting chops, and the kind of effortless charm that bland wannabes like Freddie Prinze Jr. and Ryan Phillippe can only dream of.

Best of all, the movie has Kirsten Dunst. Not since Jodie Foster's youthful heyday has a young actress shown such range and power: her résumé already includes marvelous work in Interview with the Vampire, Little Women, Dick, Bring It On, and - her finest performance until now - The Virgin Suicides, and she's not even out of her teen years yet. While the script remains hopelessly muddled about what Nicole's affliction actually is - it seems a vague form of manic-depression - Dunst, looking alternately ravaged and incomparably lovely, fills out her sketchy character with wellsprings of humor, heartbreak, and what can only be called hunger; she transcends the pulpy material she's been assigned. crazy/beautiful wouldn't be worth much without her; it's hard to recommend the movie, but this performance is almost too good to miss. In Scary Movie 2, James Woods comes through with some amusingly deadpan line readings as an exorcist and there's the occasional funny moment; I guess there are worse ways to spend a mindless hour-and-a-half. But, my God, aren't the audiences who are howling at the movie aware of how incredibly bad the filmmaking is? Actually, "filmmaking" is a generous term; "director" Keenen Ivory Wayans and his "screenwriters" have created the cinematic equivalent of Truly Tasteless Jokes, in which elements such as pacing, staging, plotting, and performance are totally inconsequential so long as the gross gags keep coming at a steady clip. Works like this are critic-proof, to be sure; no one involved is even trying to make a good movie, so what's the point of lambasting it for not being one? Yet the reason some of us remain utterly stone-faced at the supposedly "hilarious" proceedings is that crummy presentation manages to ruin just about everything; even when the film's parodies of The Haunting and Poltergeist border on the inspired, they're depressing. Scary Movie 2 will give audiences who adored the original a fine time, but it offers nothing for those of us who knew that Scary Movie itself was crap. This one is just crap warmed over.