Blow It Out Uranus: "Jupiter Ascending," "Seventh Son," "The SpongeBob Movie: Sponge Out of Water," and "Two Days, One Night" After months of previews in the wake of its delayed release, the big-budget sci-fi spectacle Jupiter Ascending - originally scheduled for summer 2014 - finally landed this past weekend. And with its opening, a question can now be asked: Was there any point at which Warner Bros. executives seriously considered pulling the plug on writers/directors/siblings Andy and Lana Wachowski's epic stinker? Maybe when Channing Tatum was cast as a human/wolf hybrid with a blond goatee and pointy ears? Or when an incensed Russian beat the hell out of his son with a throw pillow? Or when, for the performer's first scene, the Wachowskis handed Mila Kunis an all-too-symbolic toilet brush?

Following an unconvincing, meaningless prelude explaining why she's named after the planet of the title, Kunis wields her bathroom prop in service to her role as Jupiter Jones, an unlucky-in-love cleaning woman with a yen for astronomy and a career scrubbing bowls alongside her old-world-Russian mom and aunt. (A 30-second housekeeping montage shows Kunis completing more household chores on-screen than she's probably ever done in life.) But if you weren't already alerted by the star's L'Oréal-model looks and sultry eyeliner, Jupiter is more special than she appears. Also, it turns out, a lot stupider.

Desperate to purchase a pricey vintage telescope, Jupiter agrees to have her eggs harvested for 15 grand, two-thirds of which she promises to her slimy cousin Vladie (Nick Gurry, almost winning the film's grotesque-overacting contest). Right before her procedure commences, however, Jupiter's doctors morph into a cadre of naked, squawking aliens intent on killing her. But then Tatum's Caise Wise bursts into view, blasting the aliens to smithereens while scooting through the air on surfboard shoes. And then he grabs Jupiter, and the twosome sails over the streets of Chicago while being shot at by bounty hunters with lasers, all to the obliviousness of Windy City passers-by. And then, after they've made their escape 10 torturous minutes later, Jupiter and Caise take off in a stolen car, driving alongside acres of cornfields located, apparently, just outside Chicago's city limits. And then Jupiter finally finds it appropriate to demand of Caise, "I just need to know what the hell is going on here!"

Take a number, lady. And don't get your hopes up, either, because after nearly two more hours, you still won't know. The upshot is that Jupiter, unbeknownst to her, is heir to all of Earth, and Caise is returning her to his faraway world to reclaim planetary possession from the hands of the villainous, mincing space cadet Balem (Eddie Redmayne, totally winning the film's grotesque-overacting contest). But that reasonably simple sci-fi premise doesn't come close to suggesting how staggeringly manic, confounding, and imbecilic Jupiter Ascending winds up being. Forget, if you can, how fundamentally pointless the whole "the Mila will inherit the Earth" plot is. (I mean, what's she going to do with the deed of sale? Frame it? Use it to weasel her way out of parking tickets?) You still won't be able to make heads or tails of the Wachowskis' outré narrative flourishes - and wildly outré, and ugly, design flourishes - that make their big-screen seizure Speed Racer look like the model of cinematic coherence.

Why is Caise's planet, which we're told is the birthplace of humanity, also populated with creatures with elephant faces and metallic bolts on their cheeks and wombat ears - the latter of which even the usually luminous Gugu Mbatha-Raw can't make appealing? Why do bounty hunters take pains to sneak around, unseen, through cornstalks while one of their number floats just above in a completely visible hovercraft? Why does Jupiter, despite Kunis' smart-gal readings, moronically agree to marry a fey alien (Douglas Booth) five minutes after meeting him? Why is Sean Bean's sub-Han-Solo figure living in a dilapidated beehive in the Chicago suburbs? (I'd ask, "Why is Sean Bean even in this thing?!," but then I'd have to make the same query of Kunis, Tatum, Redmayne, and the other mortified-looking participants.) Nothing here makes the slightest bit of sense or is in any way exciting or charming - it's legitimately painful watching Kunis and Tatum struggle through their "flirtatious" dialogue - and the only sequence that's even close to clever finds Jupiter waiting in one maddening, interstellar social-service line after another to claim her planet. After enduring the endless bureaucratic red tape, Kunis says, "I'll never complain about the DMV again." After sitting through the endless Jupiter Ascending, neither will I. There's a scene in the action adventure Seventh Son that finds Jeff Bridges' heroic drunkard confronted by Julianne Moore's evil sorceress, and the first words she utters to the man are "Did you miss me?" If you're a fan of The Big Lebowski, and I'm not sure there's a living soul who isn't, the moment is priceless: Maude and the Dude, together again! Unfortunately, this bit lands about 10 minutes into director Sergei Bodrov's adaptation of the Joseph Delaney novel The Spook's Apprentice, and nothing that follows delivers quite the same kick. All told, the movie's not bad. This tale of a witch-hunting elder (Bridges) and helpmate (Ben Barnes) ridding their land of female meanies features some kinetic set pieces and enjoyable CGI monsters, and the dialogue - delivered by talents including Olivia Williams, Djimon Hounsou, and Kit Harington - boasts just enough wit to make the sit a painless one. Yet there's no getting around the film's Lord of the Rings-y "been there, slayed that" vibe or its drearily tacked-on romance between Barnes and the equally attractive, equally uninteresting Alicia Vikander; barring the inspired casting of Bridges and Moore, nothing separates Seventh Son from any number of similarly competent, similarly generic swords-and-sorcery sagas. See it, if you're so moved, only for Moore's delectable villainy (when she hisses "I will haunt you" to Barnes near the climax, Moore convinces you it's true), and for Bridges, whose brash, hilariously marble-mouthed hamminess makes Rooster Cogburn look like a milquetoast visitor to Downton Abbey. 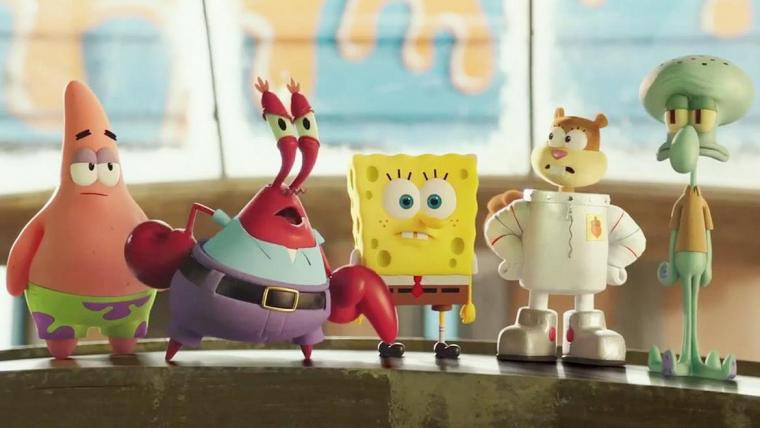 THE SPONGEBOB MOVIE: SPONGE OUT OF WATER

Do little kids (or big kids, for that matter) no longer have any interest in anything besides superheroes, or do studio heads just assume they don't? For a while, following a prelude featuring an appropriately cartoonish Antonio Banderas, director Paul Tibbett's The SpongeBob Movie: Sponge Out of Water is an easygoing, acceptable-enough expansion of SpongeBob SquarePants' animated series. There are speedy and amusing verbal gags and happily goofy detours; the best one finds the comically nefarious Plankton rooting around in SpongeBob's brain, and finding the place so toxically sweet that it makes him puke rainbows. And as with the best bits on the TV show, there are occasional flourishes - such as SpongeBob's building of a time machine at the mountaintop eatery Taco Haus - so refreshingly bizarre that your laughter is nearly indistinguishable from shock. Yet as the film's previews suggested, its extended climax finds the SB SP gang not only turning into computer-animated versions of their original cels, but costumed crime-fighters with super-powers and super-abs. And once that happens, all the charm and fizziness flies right out the window, and is replaced by so many typically frenzied chases and acts of routine slapstick that it may as well be an Alvin & the Chipmunks or Smurfs movie, but without the surplus of human comedians to hold your interest. Sponge Out of Water ends with patrons being asked to sing along to the SpongeBob SquarePants theme song, but the kids at my screening politely refused, perhaps because they were too exhausted, or disappointed, to care. 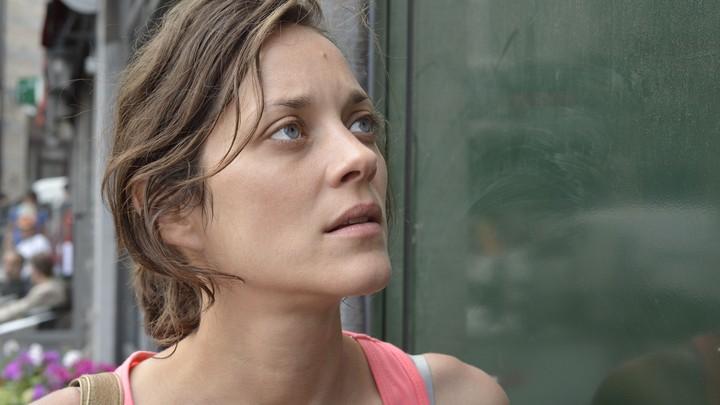 So, yeah, it was another mostly grim weekend for new releases. But if this upcoming Friday's Fifty Shades of Grey and Kingsman: The Secret Service don't deliver the goods, either, at least there'll be a terrific "new" release on hand at FilmScene, as the Iowa City venue is scheduled to debut 2014's Two Days, One Night on February 13. Directed by the legendary filmmaking brothers Jean-Pierre and Luc Dardenne, the subtitled Belgian drama (which I caught in Chicagoland this past weekend) opens with a phone call received by Marion Cotillard's factory worker Sandra, a wife and mother of two recently hospitalized for depression. She's told of a recent, economically dictated decision forced upon her 16 co-workers: They could either vote for Sandra to be re-hired and lose their annual 1,000-euro bonuses, or they could vote for their ?1,000 and opt for Sandra to be laid off. By a 14-2 margin, they chose the latter. Consequently, with much prodding from her devoted husband Manu (the magnificent Fabrizio Rongione), Sandra embarks on a weekend quest to convince her team, one by one, to reinstate her during a new, Monday-morning vote. And if this all sounds depressing as hell, it occasionally is, with the emotionally fragile Sandra put in the position of pleading for her job with equally disadvantaged low-wage workers who need their money just as much as Sandra does.

But don't make the mistake of filing the Dardennes' latest under "too sad for words," because Two Days, One Night is an exhilarating downer, with its writers/directors also finding room for pockets of uplift and victory and joy. While I wouldn't dream of giving away the results of the vote, not everyone Sandra encounters is immune to her plight; on several occasions, kindness and empathy emerge from the most unexpected sources. (In one heartbreaking beauty of a scene, a co-worker breaks down in sobs when confronted by Sandra, explaining how badly the guilt of his initial vote was weighing on him.) And even when the material is at its most wrenching, Cotillard, assisted by direction that never pushes the script's pathos, is so breathtakingly strong in her role, so damaged yet so resilient, that the performance high she delivers sends you over the moon. Some of the segments with Sandra's co-workers - particularly the violent squabble between a father and his son - feel overly manufactured, and one melodramatic detour late in the film is brushed off with somewhat implausible quickness. Yet Two Days, One Night, with its bravura and deservedly Oscar-nominated turn by Marion Cotillard, still shouldn't be missed. It's a contemporary, low-key drama about major obstacles and minor triumphs, and the movie itself is a minor triumph, too.