Plastics: "The Lego Movie," "The Monuments Men," and "Vampire Academy" Two of the characters in The Lego Movie are Lego Minifigures of Superman and Green Lantern, the latter of whom, here, is an obsequious suck-up whom the Man of Steel can't stand. That's a good joke. These decided non-friends are voiced by Channing Tatum and Jonah Hill, who famously played best friends in 21 Jump Street. That's a good in-joke. The Lego Movie is directed by Phil Lord and Christopher Miller, who also directed 21 Jump Street. That's a good in-in-joke. But the news that this new animated release is not only the cleverest, most hysterical comedy since 21 Jump Street, but an altogether stronger, more audacious piece of work than at least 90 percent of everything Hollywood gave us last year? No joke at all.

One is aborderline-amazed "Really?!?", which, considering its title all but suggests "no good will come of this," is a completely understandable reaction. The other response is a borderline-giddy "Yes!", because the movie's trailers were just funny and eye-catching enough to suggest that Lord's and Miller's outing might be something really special. It so is. An endlessly spirited and inventive slapstick that revels in the tenets of corporate-blockbuster entertainment while simultaneously (and mercilessly) satirizing them, and that looks quite unlike any digitally animated endeavor previously attempted, The Lego Movie is a shock for all the right reasons. Bring the kids if you'd like, because they'll have a ball. But don't let the film's family-friendly nature and baked-in product placement prevent you from viewing what might easily wind up the single most satisfying and intelligent comedy for adults that 2014 will offer.

Set in the plastic-plaything-populated town of Bricksburg, the film chiefly concerns the construction-worker Minifigure Emmet Brickowski (Chris Pratt), a happy-go-lucky assembly-line dullard living a life of precisely regulated routine. Enjoying the same TV shows and overpriced coffees as his fellow Bricksburgians, and grooving, like everyone else, to a peppy pop anthem titled "Everything Is Awesome," Emmet is neither unique nor particularly motivated - and consequently the ideal citizen to be lorded over by this Lego world's fascist leader, President Business (Will Ferrell). But when a case of mistaken identity results in Emmet meeting a feisty Microfigure named Wyldstyle (Elizabeth Banks) - who believes Emmet to be the nonconformist savior foreseen by the blind wizard Vitrivius (Morgan Freeman) - our theoretical hero is forced into becoming an actual one, joining dozens of Master Builders in attempting to thwart the nefarious Business' plans to Kragle the planet into submission.

I could explain what Kragling is, and how we learn where the term "Kragle" comes from, but doing so would spoil two of the movie's absolute finest jokes. (One that I will spoil finds Ferrell's despot shouting "Release the Kragle!" in front of a Microfigure cop voiced by Liam Neeson.) And therein lies both the intense appeal and, for a reviewer, moderate frustration in The Lego Movie: The film is so sensationally jam-packed with hilarious narrative intricacies, unexpected comic detours, and sublime throwaway gags that you can't decide whether to share as many as possible or, for fear of ruining the overall effect for others, to not share any at all. It would almost certainly have been enough for Lord's and Miller's creation to be the visual marvel that it is. Capturing the look and feel of stop-motion animation using almost entirely digitized means - with figures hopping about just as they would if being handled by a small child with limited motor skills - the filmmakers lend a touch of retro to the movie's astonishingly sophisticated design; even the bursts of smoke from vehicles' exhausts appear to be made entirely of plastic bricks. (I idiotically chose not to see the film in its 3D presentation, which is a mistake I won't make on my second viewing. In addition to being the most riotous one, The Lego Movie is the most purely tactile animated experience we've been treated to since 2011's Rango.) But while its trailers made me hopeful that the picture would be the exceptional treat for the eyes that it is, I really, truly didn't expect to also be wiping away tears of laughter for nearly its entire 90-minute running length.

Heaven knows the vocal cast provides more deliriously delightful readings than we could've wished for. While Pratt makes Emmet the most genial and guileless of comedic dipsticks, it's tempting to say that Freeman and Neeson have never been funnier on- (off-?) screen, and the assembled talent also includes Alison Brie, Will Forte, Nick Offerman, Will Arnett as Batman, and Charlie Day. (Ah, Charlie Day. If he never again does anything as cackle-inducing as his repeated, frenzied cry of "Spaceship!!!" here, his will still be a high-comedy career for the ages.) But add to their work plenty of brilliant pokes at media sponsorship and pop-culture vacuity, and plotting that follows a traditional rise-of-the-underdog formula only to completely subvert it, and the ne plus ultra in Star Wars gags, and dozens upon dozens of similarly enjoyable touches, and it's clear that Lord's and Miller's latest is as brainy as it is gut-busting. I could continue to offer spoilers, but why? Grab the kids (or not) and go. Seriously. Not everything in life may be awesome, but The Lego Movie sure as hell is. 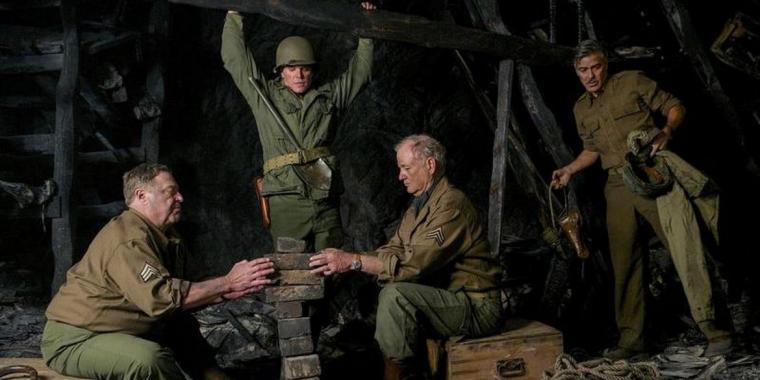 The Monuments Men, a true(ish) World War II tale about the procurement of stolen art from the Nazis, seems almost designed to make people who hate George Clooney hate him even more. What's incredible about the film, though, is that it also seems designed to make people who like Clooney, such as myself, hate him a little. The traditional knocks against the man seem to be that he comes off as callow, smug, and self-aggrandizing. But I wound up feeling that way about the entire movie, which Clooney directed and co-wrote with Grant Heslov; this professionally rendered but alternately lofty and cutesy-poo enterprise appears so enraptured by its own high-mindedness, and so charmed by its (unfunny) baggy-pants comic turns, that it's nearly insufferable. (Alexandre Desplat's oppressively twinkly score, for its part, is insufferable.) Playing art historians and museum curators sent to Europe in the hopes of reclaiming priceless artifacts, Clooney, Matt Damon, John Goodman, Bob Balaban, Bill Murray, Jean Dujardin, and Hugh Bonneville have nothing to do but amble from one blandly conceptualized hiding spot to another while dropping stale jokes and striking lame sentimental chords, and hitting their one-note roles' one notes over and over again. (You get the full extent of Balaban's character merely through the actor's casting.) And when the film isn't insulting you with its depressing waste of those performers and Cate Blanchett, and boring you with its scenes of art-retrieval that are wholly lacking in suspense and don't freaking go anywhere, it's smacking you upside the head with banal "Art Is Important!" moralizing, along with constant, ripped-from-today's-headlines reminders that the Nazis, you know, were kind of jerks. I yawned and grimaced all throughout The Monuments Men, and only perked up during the scene in which Murray had to undergo some emergency dental surgery - and only then because, while the comedian was attempting to talk with a metal instrument hacking away at his teeth, I briefly, unconsciously started watching Little Shop of Horrors instead. 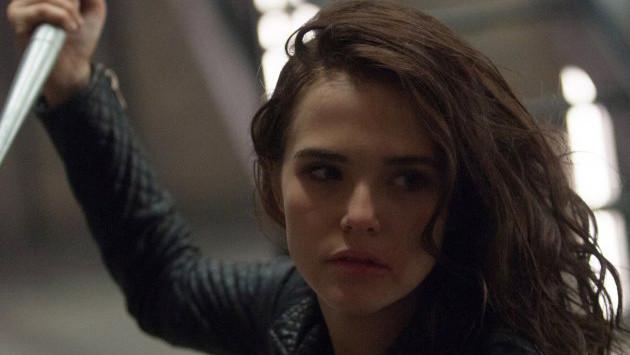 In Vampire Academy, a group of young, hottie bloodsuckers and their protectors hang out in an Oregon town that looks and feels a lot like Twilight's Forks, Washington, and go to a boarding school that looks and feels a lot like Harry Potter's Hogwarts, and ... . Well, and there you have it. The movie is like Twilight meets Harry Potter, with a little bit of Heathers thrown in for good measure. (Hey, look at that! The screenplay - adapted from Richelle Mead's YA novel - is by Heathers scribe Daniel Waters!) It's all about as uninspired and unmemorable as you'd expect, and there's really no point in getting further into this offering by director Mark Waters (Daniel's brother), considering that the film's dismal, $4.1-million opening weekend indicates that we won't have to worry about sequels. So offering praise where it's due, let me just say that the tart, well-delivered one-liners by the appealing Zoey Deutch suggest, amusingly, the second coming of Juno-era Ellen Page; that Modern Family's Sarah Hyland is, as ever, utterly adorable; and that the movie is at least witty enough to verbally acknowledge the works from which it's stealing. Oh, and about 15 minutes before Vampire Academy's climax, Deutch's character says to a friend, "At this point, I can't remember who loves us and who hates us." So bonus points for honesty, because neither could I.