Grecian Yearn: “Seven Against Thebes” and “Antigone,” at Lincoln Park through July 17 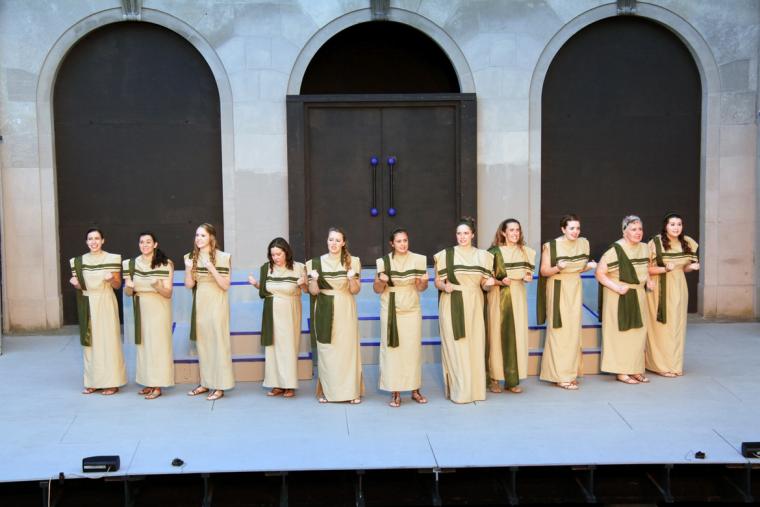 The Seven Against Thebes chorus

Ten years ago, almost to the day, I left my Rock Island apartment to make my first acquaintance with Genesius Guild’s annual classical-Greek dramas performed largely in mask, reviewing Aeschylus’ Seven Against Thebes and Sophocles’ Antigone. This past Saturday, leaving the same apartment, I ventured to Rock Island’s Lincoln Park to review Genesius Guild’s masked-drama presentations of ... Seven Against Thebes and Antigone. So nice to see that so much in my life has changed over the past decade.

But it was so nice, sans sarcasm, to see that so little of Genesius Guild has changed over that same period, at least in regard to the Aeschylus and Sophocles, which were just as engaging as I remember them being in 2006. In truth, the Seven Against Thebes opener was a good deal livelier than I remembered, partly because I don’t recall any cast members from that previous production posing, shield in hand, high on the roof above the Guild stage. I actually don’t recall a Guild performer ever doing that before.

However, like other frequent Guild patrons, I’m sure, I absolutely remembered the organization’s ancient-Greek tales being preceded by the traditional processionals of actors crossing the stage, giving us a sneak peek at both the casts and the typically fabulous wardrobe contributions of costumer Ellen Dixon. As I’d made only a cursory glance at the program before Executive Director Doug Tschopp’s introductory remarks, I was thrilled to see several familiar faces amongst the participants – Jo Vasquez! Greg O’Neill! Amanda Grissom! – and to see the walk climax with the arrival of Guild legend Bob Hanske, who trailed the others by a good eight feet. (It was like a live stage version of the opening credits to a movie: “... and Bob Hanske as Creon!”)

Dixon’s designs, though, boasted a thrill of their own. Sabien Minteer, as Thebes’ Herald, sported a dynamic black ensemble with sky-blue accents and kick-ass laced sandals; Andrea Braddy’s Antigone and Mattie Gelaude’s Ismene looked respectively gorgeous in floor-length creations of faded yellow and avocado green. And adding to the enjoyment of seeing Hanske was seeing what he was wearing: a majestic outfit of deep purple with an accompanying sash that looked made from the Carol Burnett dress that was made from the curtains in her Gone with the Wind sketch. (The shows’ elongated, color-coordinated masks, meanwhile, displayed their usual Kabuki grandeur, and while no designer was listed in the program, credit for them has in the past gone to Earl Strupp – also an Antigone chorus member – and the Reverend George Wuellner, who created the masks for 2006’s Thebes/Antigone.) As much of a treat as it was to see everyone so well-dressed, it was also a relief, because as audiences for these masked dramas know, the plays themselves don’t feature much movement; we may as well have something arresting to look at. In director Dori Foster’s Seven Against Thebes, we did, due not only to Dixon and the mask-makers, but to Foster’s terrific compositions, which made marvelous use of the entire playing area, as well as the area surrounding it. This 45-minute Antigone prelude, one that concerns the battle between armies led by Theban ruler Eteocles and his brother Polynices, was mostly a stand-and-orate affair. Yet Foster continually positioned her 11 female chorus members in inventive, eye-catching ways, and placed six of the soldiers that Eteocles describes in detail off-right and -left of the stage, smartly suggesting armies encroaching on the walls of Thebes. The seventh soldier, as previously mentioned, wound up on the roof, and when the man was revealed to be Polynices, the sight of him suddenly towering over his brother made both thematic sense and a great, giggly image.

Happily, Thebes’ portrayals easily matched the configurations. Gary Adkins, with his large hands and ponytail that ran halfway down his back, cast an intimidating figure as Eteocles and spoke with lucidity and power; you could hear the masked Adkins perfectly even during the inevitable, show-interrupting roar from the downhill railroad tracks. The elocution and conviction of Minteer’s Herald and Doug Adkins’ Messenger were similarly clear, and while the chorus women weren’t in masks, you’d likely be hard-pressed to find anyone unhappy about that. As they expressively suggested the anxiety, fear, relief, and horror of an entire nation, it was a delight to direct my gaze from one wholly present performer to another, and barring only a couple of mildly tardy line pick-ups, the sensationally timed choral repartee was like a game of verbal Hot Potato that everyone wound up winning.

In one of the few disappointments of director Bryan Woods’ Antigone, the male chorus, all of them adorned in beige cat-burglar masks, didn’t seem nearly as assured as the Thebes ladies. Beats between the eight speakers’ lines were longer, and not everyone appeared completely in the moment, a few performers assuming the same deadpan whether they were hearing of an off-stage death or laughing (or “laughing”) at one of Creon’s sardonic comments. Individually, though, their recitations were oftentimes topnotch, given O’Neill’s enthusiasm, Strupp’s sepulchral tones, and the unfailing energy of Michael Callahan’s Choragos. And as with Thebes, the fully masked actors delivered exquisite vocal turns that fully conveyed the meaning behind their words, with a few of them so verbally animated that you’d almost swear the eyes on their headwear were blinking. Antigone and Ismene are the sisters of Thebes’ deceased Eteocles and Polynices (oops ... um ... retroactive Spoiler Alert!), and Braddy and Gelaude did an excellent job of connecting the evening’s first one-act with its second, instantly communicating how the Theban bloodbath inspired the sisters’ pain, Antigone’s fury, and Ismene’s pleas for acceptance. Our views of them only became richer as Sophocles’ tragedy progressed, and while Gelaude performed the challenging feat of enacting delicacy without sacrificing projection, Braddy’s vocal strength would have shaken the rafters if there were rafters to be shaken. Her gestures were also at all times exquisite, and Braddy pulled off an especially neat trick in which she would subtly cock her head toward the figure she was addressing (and usually castigating) to her left or right, making it seem like the mask itself was raising an eyebrow.

Visually, Antigone was the more static of the evening’s offerings, but Woods – a memorable Creon in 2006 – more than made up for the lack of movement in his ability to elicit superlative performances. Although he had a tendency, on Saturday, to accidentally jump his co-stars’ lines, Hanske employed his magnificent voice and dry wit to masterful effect, earning a particularly loud cackle when Doug Adkins’ Sentry took a comedic eternity to deliver news and Creon shouted, “Come to the point!” Mollie Schmelzer imbued her blind prophet Teiresias with unfussy seriousness and vocal zeal, Mallory Park was an earnest and appropriately mournful Tragic Messenger, and Woods clearly did some exceptional work with Paige Massie, who should be deservedly proud of her Euridice.

With designer Andy Shearouse providing for both shows well-recorded sound and some nicely understated lighting effects (the latter, naturally, being more evident after the sun went down), Genesius Guild’s Seven Against Thebes and Antigone two-fer was enormous fun, and special kudos have to go to Jeremy Weinstein, the young actor cast as Antigone’s fiancé Haimon. I don’t recall seeing Weinstein in any previous Guild productions – or any other area productions, for that matter – but I won’t soon forget him, as his anguish, frustration, and fortitude were superbly felt, and made (2,000-year-old Spoiler Alert!) Haimon’s off-stage passing truly heartbreaking. To top it all, his vociferous anger when confronting Hanske’s Creon actually got the freakishly loud frog, or whatever it was, to stop its ceaseless croaking from beneath the stage. Well done, Mr. Weinstein! Even Guild vet Gary Adkins couldn’t accomplish that when Eteocles yelled, “SILENCE!!!”

Seven Against Thebes and Antigone run at Lincoln Park (11th Avenue and 38th Street, Rock Island) through July 17, donations are encouraged, and more information is available by visiting Genesius.org.