Pleasantville: “The Marvelous Wonderettes,” at the Village Theatre through July 17 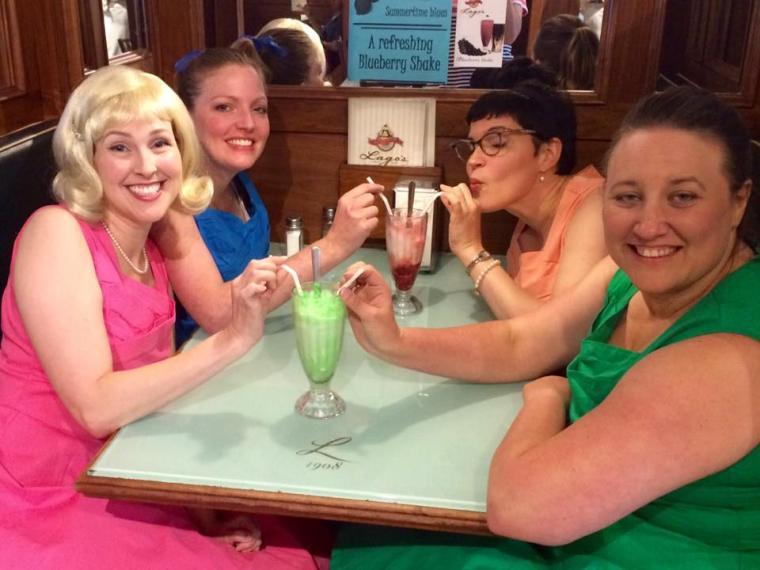 Enacted by the delightful, gifted quartet of Michelle Blocker-Rosebrough, Melissa Anderson Clark, Sheri Olsen, and Erin Platt, The Marvelous Wonderettes is Countryside Community Theatre’s intentionally minimalist summertime offering after numerous seasons of grandly scaled, extravagantly cast Broadway hits. As it’s better to go small than go bust, I admire the organization’s decision to downsize. Yet if you know nothing about this undemanding musical, I urge you, in the interest of your time, to avoid the synopsis on its Wikipedia page, which details in 1,576 words what can be effectively distilled to 15: "Four young women sing ’50s songs at their prom, then ’60s songs at their reunion."

Its first half finds the titular, amateur do-wop group performing for their 1958 Springfield High School senior prom in, I guess, whatever state the Simpsons live, treating us to period tunes such as “All I Have to Do Is Dream,” “Mr. Sandman,” “Dream Lover,” and “Lollipop.” Like most people, I’m a fan of those songs, and of several others in Act I. But if I can’t muster a lot of enthusiasm for Wonderettes pre-intermission, it’s because I didn’t much care for giggly, entitled, back-stabby high-school girls even when I was in high school. The incorporated numbers are just right. What isn’t, for my tastes, is their being presented, and frequently disrupted, by playwright Roger Bean’s lazily imagined suggestions of 1950’s teendom – four PG-rated Heathers who barely display one personality trait apiece. Blocker-Rosebrough’s Betty Jean is the boisterous one, Clark’s Cindy Lou is the ebullient one, Olsen’s gum-popping Suzy is the laid-back one, and Platt’s Missy is the officious one, and each performer plays her stereotype with charisma and zest. (Clark’s exaggerated perkiness is so forceful it practically leaves welts.) Yet because the characters are all competing for prom queen and, as created by Bean, so-o-o incapable of holding it together, the pleasant pop ditties keep getting waylaid by the girls intentionally stealing focus or sabotaging others’ solos or refusing to sing with vigor or marching off in a huff – actions that might be “right” for the moment but don’t do anything for the songs themselves. Act I was further hindered by the lingering question of just how talented these girls were meant to be. We’re informed early on that the Wonderettes are the prom’s substitute entertainment after the originally scheduled boys’ band proved unavailable, which feels like Bean’s shrewd way of telling the show's audience – and maybe its participants – that if things appear a little slapdash, that’s okay. (Certainly this production’s scenic design, with no specific designer credited in Countryside’s program, looks hastily assembled.) But while the cast’s solos on July 8 were lovely and the challenging harmonies generally more than fine, you couldn’t always say the same about the movement. Director Christina Myatt choreographed plenty of charming and period-savvy leg, arm, and hand motions, yet it was rare for the women to ever be wholly in sync; there was always at least one performer whose moves were just a beat or two off, or who didn’t seem quite aware of what the others were doing. You could easily chalk this up to opening-night jitters or (thank you, Mr. Bean) the script’s “They were hired last-minute!” contrivance, but no one on-stage ever looked visibly rattled, and the glitches weren’t major enough to appear comically intentional. In general, the Act I routines just read as under-rehearsed.

Still, there was a fair amount to enjoy, and a lot to enjoy if you include Wonderettes’ cast singing so well, which I certainly do. Clark’s “Allegheny Moon,” a song I don’t recall hearing before, and Olsen’s “Stupid Cupid” were particularly endearing, as was the finale “Hold Me, Thrill Me, Kiss Me,” a tune that, in a perfect world, would end the first act of every musical. And the medley that found Missy declaring her love for the girls’ choir director – a series of flirtatious numbers buoyed by Platt’s joyous vocal hiccups on the “Oh!”s in her “Mr. Lee” solo – was so pert and lively that you could handily ignore the thematic ickiness of Missy’s age-inappropriate crush. (On Friday, it also helped that the “Mr. Lee” being sung to in the audience was Platt’s real-life husband Jason. I’m almost positive he wasn’t a plant, as the familiar area actor looked genuinely surprised when he was pulled on-stage. Then again, he is a really good actor.) There were also a bunch of ticklish comedy bits that felt more so for appearing unscripted, such as Platt’s repeated directive “Eyes” – as in, “All eyes on me now” – and Blocker-Rosebrough’s reference to the prom-queen tiara as a hat. And Wonderettes’ Act II, happily, was far stronger than Act I, partly because it didn’t feature much choreography, and mostly because it finally gave its stars the chance to actually act. Set during the ladies’ 10-year Springfield High reunion in 1968, it didn’t seem that they’d been at all affected by civil rights or Vietnam or the hippie generation – outside, perhaps, of Missy’s groovy wardrobe – and their continued dependence on men for their happiness would horrify those fighting in the decade’s women’s-lib movement. (For an all-female musical, this show would fail the Bechdel test pretty spectacularly.) Yet I was relieved that we were at least spared the anxious high-school cartoons of the production’s first half, and that our characters, instead of constantly yelling at each other, were allowed at last to talk to each other, and to us.

The snippy 1958 rivalry between Betty Jean and Cindy Lou morphed into a sweet, touching testament to long-term friendship, and the change looked great on Blocker-Rosebrough and Clark, whose line deliveries softened beautifully, and whose soulful performances of “That’s When the Tears Start” and “Leader of the Pack,” respectively, were legitimately emotional. (I’ve adored Clark, Olsen, and Platt, collectively and oftentimes publicly, in many, many shows over the years; the best compliment I can pay Blocker-Rosebrough, who I’ve only seen on-stage a couple times, is that she’s totally in their league.) Platt’s dynamism gets tempered by true romantic ardor on several songs whose titles I won’t reveal for fear of spoiling Missy’s fate. (But on Friday, yeah, they again involved Jason. By night’s end, he was practically the fifth Wonderette.) Olsen, meanwhile, gave one of the most convincing portrayals of a certain physical state I’ve ever seen on a local stage, and when it came time for her to attack Aretha Franklin’s “Respect,” it was as if she were channeling all of Suzy’s discomfort to kick that tune right in the ass. Musical revues can live or die by their 11-o’clock numbers, and Olsen’s was a beaut.

I’d wish that there were more just like it, but that would be wishing for a different show altogether, because The Marvelous Wonderettes is nothing if not wholesome, conventional, and unthreatening – the polar opposite of Aretha. Yet even if, like me, you prefer musical outings with a bit more bite, it’s hard to argue with the warming effects of a genuine smile, and at its best that’s what Myatt and her winning ensemble provide. It’s their party, and you’ll grin ’cause you want to.

The Marvelous Wonderettes runs at the Village Theatre (2113 East 11th Street, Davenport) through July 17, and more information and tickets are available by calling (563)285-6228 or visiting CCTOnStage.org.