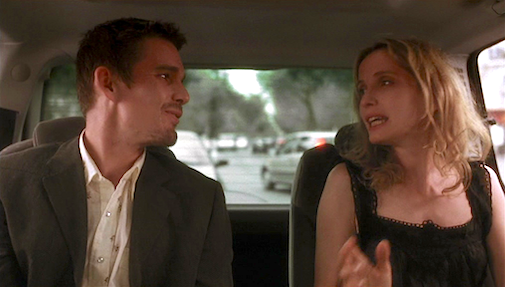 Ethan Hawke and Julie Delpy in Before Sunset

Was I feeling especially sensitive in 2004, or were the year's most memorable cinematic works, coincidentally, the most unabashedly romantic ones? It could certainly be me - the only (fictional) televised event that moved me to tears was the unlikely but enormously satisfying kiss between Martin Freeman's Tim and Lucy Davis' Dawn on The Office Special. However, in a year filled with lots of very good movies, the truly great ones in 2004 all have in common characters who yearn - for more time, more memories, more experience - and for whom romance is a palpable force, one with the capacity to knock you, well, Sideways. I'm a huge fan of all the films in this year's Top 10 list, but the first three, for certain, are not to be missed.

1. BEFORE SUNSET - There are movies that you like, and there are movies that you love. And then there are movies that you really love. I love Richard Linklater's Before Sunrise, in which Jessie (Ethan Hawke) and Celine (Julie Delpy) meet on a train, disembark in Vienna, and spend one fateful evening discovering that they might be soul mates. But I can't get over the richness and grace of Linklater's follow-up, which expands the magic and romance of the first film while simultaneously exploring brand-new, frighteningly emotional territory. The act of watching Jessie and Celine - played to perfection by Hawke and Delpy - reunite after nine years becomes such a panorama of comedy, anxiety, fear, hope, and profound connection that it transports you beyond the film itself; Before Sunset enables you, with a clear eye, to confront yourself, look back on your life, and ask, "Am I happier now?" Linklater, his crew, and his stars turn a potentially navel-gazing excursion into the most supremely enjoyable movie of the year - bonus points to Linklater for pulling off the year's most stylish, yet least show-offy, trick, in having the entire film unfurl in 80 minutes of real time - and give us an ending that couldn't possibly be improved on; I can't even think about the final five minutes without welling up. Scene for scene, nothing I saw in 2004 came close to matching the radiant glow of Before Sunset. I really love it.

2. ETERNAL SUNSHINE OF THE SPOTLESS MIND - Given a few more viewings, I might wind up adoring this film nearly as much, because every time I watch director Michel Gondry's and screenwriter Charlie Kaufman's astonishingly clever and inspired meditation on true love - it's the kind of film for which repeat viewing should be mandatory - I discover hidden facets to its greatness. Anchored by the marvelous Jim Carrey and Kate Winslet, the film's romance keeps growing in emotional complexity, but in recent viewings, what's amazing me most is the inevitable impotence of Lacuna's memory-purging operation: All three of the film's characters who have undergone the treatment wind up either vaguely remembering their pasts or, in the case of Kirsten Dunst's Mary, falling again for their supposedly forgotten objects of desire; I adore the movie's thesis that memory is experience, and it can't be erased. (Isn't déjà vu merely the sensation of briefly remembering something you feel you'd forgotten?) Eternal Sunshine, a supremely humane and witty endeavor, is far more fun than smart movies are supposed to be, and far smarter than movies, in general, have any right to be.

3. SIDEWAYS - There's a moment in Alexander Payne's exquisite road-trip comedy in which Thomas Haden Church's Jack, readying himself for a tryst, sprays odor-repellant on his socks, and I thought: This movie really gets guys. Not men, per se, but guys, who continually feel like undergrads and can't fathom how to go about getting the things they want from life. The problem for Jack and Miles (a stunningly good Paul Giamatti) isn't that they're unequipped to handle middle age; it's that they're unwilling to accept their own failings. At its best, Sideways is about how two fundamentally discontented men find a way to embrace their limitations and become just a little bit happier. The audience, meanwhile, is loads happier, because Payne's film is a bracingly acute and hysterical work, featuring some of the year's best acting - Virginia Madsen's work is breathtaking in its emotional honesty - and, at no extra charge, some wonderful insight into the art of wine-tasting. Sideways is the kind of film you see, love, and want to see again immediately, preferably with a big group of friends in tow.

4. KILL BILL: VOL. 2 - The biggest surprise of my movie year: After barely enduring the hyperkinetic, ultra-violent nothingness of Quentin Tarantino's Kill Bill: Vol. 1, I find myself - as a professional obligation - at Kill Bill: Vol. 2... and wind up spending those two hours in a state of constant and unwavering giddiness. There are set pieces here so astonishing - Uma Thurman being buried alive! Daryl Hannah's comeuppance! - that you want to applaud (and would if it didn't feel like you were disrupting the movie's momentum), and now that the violence in Vol. 1 has a context, this second half - just like Before Sunset - positively enriches the experience of the original. (Now that's a sequel.) Thurman gives an almost mythic portrayal of grief, anger, and bloodlust, yet is devastatingly touching when not in super-avenger mode; Tarantino directs her, and the film itself, superlatively. At the beginning of 2004, I could never have imagined I'd write this, but Kill Bill positively rocks.

5. METALLICA: SOME KIND OF MONSTER - Several documentaries received widespread attention in 2004 (particularly, of course, my number-eight selection), yet this one was all but ignored. What a shame, because Joe Berlinger's and Bruce Sinofsy's behind-the-scenes account of the notorious rock band, led by James Hetfield and Lars Ulrich, is an incredibly funny, surprisingly moving, and endlessly fascinating look at the tensions that arise between talented people trying, in vain, to collaborate when they're not even sure they want to anymore. If the heavy-metal angle scared off documentary fans, and vice versa, everyone missed out; this was one of the year's most supremely entertaining movies. Be sure to seek it out on DVD.

6. KINSEY - In a season top-heavy with bio-pics on everyone from The Aviator's Howard Hughes to - gulp - Beyond the Sea's Bobby Darren (the memories of which still haunt me... where's Lacuna when you really need it?), this one, about celebrated/reviled sex researcher Alfred Kinsey, deserves the most accolades. Liam Neeson's fanatical, larger-than-life performance is a thrill to behold, yet nearly everything about this picture is sensational, from Laura Linney's beguiling normalcy to Peter Sarsgaard's transfixing intensity to writer-director Bill Condon's thrillingly nonjudgmental take on his subject matter. Bio-pics, in general, aren't known for their entertainment value. Kinsey, however, is one of the most sheerly enjoyable movies of its type ever made.

7. WE DON'T LIVE HERE ANYMORE - Everything that Closer should have been but wasn't. Director John Curran's adulterous-relationship drama, with its biting screenplay by Larry Gross, was 2004's most emotionally brutal film, but also one of its most accurate, and certainly one of its most revealing. Three of the film's four leading players - Mark Ruffalo, Laura Dern, and Naomi Watts - outdo themselves with their wrenching, hungry work (the fourth, Peter Krause, has some trouble keeping up), and the verbal sparring that results is both horrific and, from an audience perspective, almost theatrically enjoyable. Another must-rent.

8. FAHRENHEIT 9/11 - Beyond the brouhaha over whether Michael Moore misrepresented footage or fudged his facts, what cannot be denied about Fahrenheit 9/11 is that it was a work borne of true anger, sadness, and empathy, and how many modern American movies feel like they're borne of true anything? With his anti-Bush diatribe, Moore showed new artistry as a moviemaker; I'm convinced that the film's first 20 minutes - especially Moore's subtle, scary, tender rendering of the immediate 9/11 aftermath - are perfection. Politically, Moore might not have gotten the end result he hoped for, but moviegoers weren't gypped in the slightest: Moore's work is still bitterly funny, emotionally undoing, and marvelously well-crafted. Bring on the sequel.

9. MARIA FULL OF GRACE - In his tale of a young Colombian woman (the magnificent Carlita Sandino Moreno) who agrees to internally smuggle heroin into New York City, writer-director Joshua Marston tightens the screws on his heroine so effectively that in addition to being one of the finest dramas of the year, it's practically the finest horror movie of the year. The subject matter might make Maria sound like unbearable viewing. But Marston's gift for avoiding melodrama, combined with his empathy for Maria and her beleaguered "colleagues," makes the movie, after a shaky opening, exhilarating, and as touching as it is frightening.

10. THE INCREDIBLES - More wonders from Pixar; having released six winners in a row, I can't imagine that anyone in Hollywood is more deserving of their salaries than that studio's creative team. Yet, in The Incredibles, there's no denying the spirit of writer-director Brad Bird, whose 1999 The Iron Giant was a beautifully nuanced animated work, and who more than tops himself with this wise, witty adventure. As usual with Pixar's output, the movie affects different age groups in different ways - I saw the movie as a great analogy for the battle against middle-aged ennui - yet it's visually arresting and entertaining enough to make everyone who sees it feel like a kid again.

And the Runners-Up to Those Runners-Up: The Bourne Supremacy, Collateral, Harry Potter & the Prisoner of Azkaban, Hero, The Ladykillers, The Life Aquatic with Steve Zissou, Ray, Sky Captain & the World of Tomorrow, Spider-Man 2, Super Size Me.

10 Worst: The Big Bounce, Christmas with the Kranks, A Cinderella Story, 50 First Dates, Man on Fire, The Notebook, The Passion of the Christ, Spanglish, The Whole Ten Yards, Wicker Park.

10 Best Movies from 2003 That I Eventually Saw in 2004: The Barbarian Invasions, Bubba Ho-tep, Elephant, The Fog of War, Girl with a Pearl Earring, Good Bye, Lenin! , House of Sand & Fog, Monster, The Station Agent, The Triplets of Belleville. (And thank you to Rock Island's Brew & View for booking seven of those 10 titles.)

Movies I Still Don't Know What to Make of, but Am Looking Forward to Seeing Again: Dogville, I Heart Huckabees, Napoleon Dynamite.

Out of That 137, the Number That Were Either Sequels or Remakes: 31.

Biggest Hit That Nobody You Know Saw: Garfield: The Movie.

Biggest Hit That Nobody You Know Liked: The Village.

Most Fervent Hope for 2005: I was thinking about writing: "That the next Star Wars installment doesn't completely suck." But come on - we're all praying for that. Instead, let's hope for the release of more works like Fahrenheit 9/11 and, yes, The Passion of the Christ, both of which, by fueling passionate endorsement and vociferous discourse, made movie-going feel vital in 2004. You don't have to admire both, or even either, of these works, but it would be hard to argue that our culture doesn't need more of them.