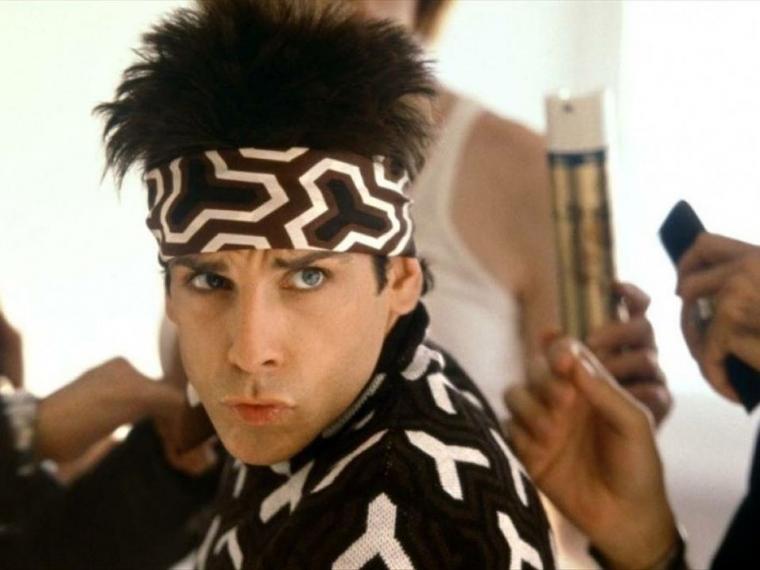 Those of us who've been waiting, in film after film, for Ben Stiller to hit the comedic peaks he reached on his short-lived TV series The Ben Stiller Show might find Zoolander pretty irresistible.

When he starred in that 1992 sketch-com (which lasted all of thirteen episodes, co-starred the wildly talented Janeane Garofalo, Andy Dick, and Bob Oedenkirk, and managed to contain more laughs in a half-hour than a season's worth of SNL), he seemed an unstoppable comic powerhouse: a brilliant mimic who found a way to turn show-biz vanity and fatuousness inside out, making us roar with laughter at those we were meant to esteem. He was brazenly, subversively funny. Yet in his big movie roles - especially in hits like There's Something About Mary and Meet the Parents - he's been specializing in a mildness that borders on banality; his line readings are smart, but his characters seem neutered, as if Stiller were apologizing for being a movie star. His over-the-top comic bravura occasionally came through in Mystery Men, and everyone loves the scene in Meet the Parents where he threatens to kick De Niro's ass, but not until Zoolander has a movie allowed Stiller to really run wild; even though the film itself is spotty, Stiller's portrayal of the grandly stupid male model Derek Zoolander is wickedly inspired.

While many have been ragging on the film's plot, which deals with Zoolander being programmed to murder the President of Malaysia (don't even ask), no one appears to be commenting on how clever the movie's design is: Zoolander is simultaneously a Ben Stiller vanity project (he also directed and co-wrote the film) and a parody of a Ben Stiller vanity project. Many comics would have the audacity to play a homelessly dim Sexiest Man in the World, but the gag would be that only in the universe of that movie would anyone else ever buy it; imagine Mike Myers, David Spade, or Rob Schneider in the Zoolander role, and it becomes, at best, a one-joke affair. But Ben Stiller is a great-looking guy with an amazing physique - he's completely believable as a shallow male model - and so there's an added, exquisite layer of self-parody built into Zoolander. When Stiller sucks in his cheekbones and adopts a vaguely androgynous pout to approximate Zoolander's dangerous-yet-sexy air, he's not only satirizing the male-modeling industry (admittedly, an easy target) but celebrity itself, and his celebrity in particular. ("I'm a big-time movie star," he might be saying, "and I'm an egomaniacal dimwit.") Stiller isn't afraid to make himself look like a fool, and in scenes like the ones in which Zoolander scrunches his forehead and attempts to work out a piece of information that any second-grader could comprehend, he's peerless; Zoolander has room in his head for exactly one idea at a time. Ben Stiller ventures so deeply into this sketch-comedy character that, like Molly Shannon in Superstar, his performance has been ridiculously underrated; maybe audiences (and critics) don't like it when an actor comes too close to being legitimately, frighteningly dense.

The movie features a handful of scenes that could honestly be called classics: Zoolander's acceptance of the Best Male Model Award he didn't win; his attempts to bond with his coal-mining father and brother (adroitly played by Jon Voight and a wordless Vince Vaughn); his runway battle with the equally vain and almost-as-dumb model Hansel (Owen Wilson, equally committed and almost as funny as Stiller); a 2001: A Space Odyssey parody that you can't believe Stiller and Wilson pull off; and a pitch-perfect capper involving the world's most grotesquely inappropriate water fountain. Zoolander is a comedy in which the bits that don't work are mostly painless - they include a typically unfunny Will Ferrell turn and a drab role for Stiller's real-life wife, Christine Taylor - and the ones that do are sensational, and for those of us who've been Stiller fanatics since 1992, it shouldn't be missed. John Dahl's Joy Ride is an expertly executed, totally enjoyable genre flick that's remarkable for its refusal to cater directly to the teenage market; the action revolves around a prank involving a CB radio, and how many teens even know what that is? In this latest homage to Spielberg's 1971 TV movie Duel (the recent Jeepers Creepers started out as one, too), three youths (Steve Zahn, Paul Walker, and Leelee Sobieski) are terrorized by a menacing, faceless truck driver after a CB-related joke on him goes murderously awry. That's about it, plot-wise, but Dahl stages the action with relentless verve and in strong primary colors - his work is especially fine in the early scenes, in which the insidious low voice of the trucker (think Ted Levine in The Silence of the Lambs) gives you the shivers - and it features a terrific, breakout performance by Steve Zahn. This gifted actor has been wonderful in lots of second-banana supporting roles, and so his lead performance here is doubly enjoyable. Zahn still has his uniquely wry way with comic dialogue, and when his character is scared (which is often), he looks and acts truly freaked; his natural humor gives weight to Joy Ride's horror-movie hook. The movie ends silly but stays smart for most of its 95 minutes, and with Dahl, his collaborators, and the marvelous Zahn offering topnotch work, it's the year's best grab-your-date-and-shriek entertainment. Serendipity is one of those romantic comedies in which the attractive leads (here, they're John Cusack and Kate Beckinsale) meet cute, fall for one another despite being involved with others, get separated through an act of fate, confide their loves to each of their best friends (here, they're Jeremy Piven and Molly Shannon), and come this close to never seeing each other again before another act of fate intervenes, leading to Happily Ever After. Since these clichés are part of the movie's design - it's all about whether fate or chance or whatever-the-hell-you-wanna-call-it dictates the course of our lives - none of them bothered me much in Serendipity.

Lots of other things did, though. Even ignoring the overeager, forced "wackiness" of Peter Chesholm's direction, you're left with a load of elements that defy belief, and I'm not talking about the film's intentionally out-there acts of coincidence - you never for a moment buy that Beckinsale is a psychologist, or that Beckinsale and Shannon are friends, or that Cusack and Piven are New Yorkers, or that Eugene Levy's sales clerk wouldn't be locked in an asylum, or, most damagingly, that Cusack would spend so much time searching for a woman who is, I'm sorry, a serious flake. She's supposed to be the love of his life, but the leading duo display no chemistry in their brief time together onscreen; it's as if Cusack was putting all his emotional energy into a relationship that will give him the biggest headache imaginable.