Is This Heaven? No, It's ... : "The Music Man," at the Clinton Area Showboat Theatre through July 3 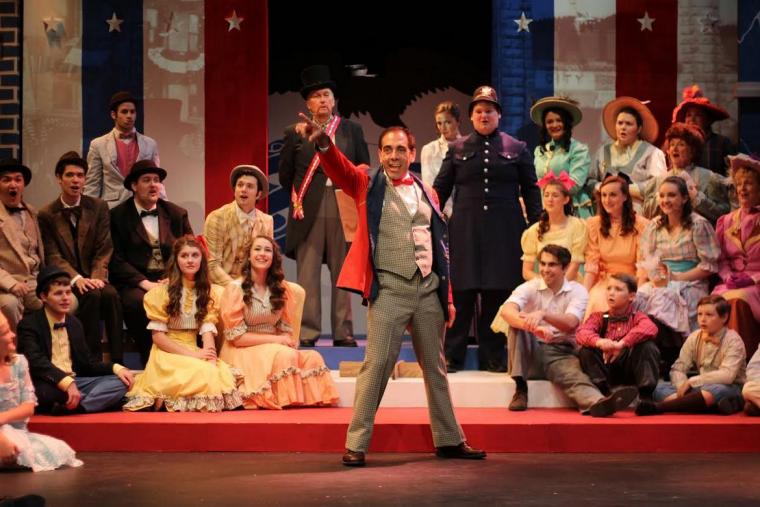 Jay Berkow and ensemble members in The Music Man

When people are asked what they think of when thinking about Iowa, they mention the following in no particular order: corn, Grant Wood, corn, Field of Dreams, corn, Hawkeyes, corn, Bruce … um … Caitlyn Jenner, corn, pork, corn , and the final answer – Meredith Willson. A famous son from Mason City, Willson is best known for writing and composing the uniquely American musical-theatre classic The Music Man.

The Music Man is the second production in the Clinton Area Showboat Theatre's “American Classics” season and follows the exploits of traveling sales slug Harold Hill, who poses as a band organizer and music teacher and also sells uniforms and instruments, preying on the gullible townsfolk of the fictional River City. The crux of the show is that Hill is no musician and has his eye on taking as many instrument orders (and as much cash) as possible, leaving town long before the citizens catch on to his ruse.

Jay Berkow reprises his Showboat rendition of the title character, the slippery and seductive musical-instrument salesman, and is like the Earl Scheib of Harold Hills. He takes the character way over the top, mugging from scene to scene with great energy and style, and to the enjoyment of many in the audience. (The only thing missing from this interpretation was the free popcorn, colorful tent, and pony rides for the kids.) The role could have benefited from some more nuanced moments, particularly when Berkow interacted with the town librarian Marian (Mary Beth Coolidge), and he seemed to struggle with high notes and harmonies in several numbers. Coolidge was clearly the yin to Berkow's yang, as her Marian was cool under pressure, prim as required, but also intelligent and insightful. In her Showboat debut, Coolidge showed off a beautiful singing voice that clearly has its roots in opera without creating a character that is a snobbish diva. I particularly enjoyed her soft features and pure voice juxtaposed against the outlandish Berkow while singing the duet “Till There Was You.” In the scene-stealing role of Marian's little brother Winthrop Paroo, Saturday night's Joseph Brune (who alternates the role with another young actor) did a wonderful job of lisping his way through the character, and charmed the audience in every scene he was in. For such a young actor, Brune has a great sense of comedic timing and a beautiful voice to match.

The always-delightful Jalayne Riewerts plays Mrs. Paroo with a fiery red wig and equally fiery Irish accent, and delivers wonderful energy and professionalism every time she steps on stage. Also of special note is Lara Technoff as the wife of the town's mayor (Eulalie Mackecknie Shinn). Technoff is funny … and I mean funny. Her bug-eyed, deadpan shtick made me giggle whenever she was featured, and she and the other “Pick-a-Little” ladies need to be commended for keeping straight faces throughout their scenes. Kudos, too, to scenic and costumer designer Steven P. House, whose simple, patriotic set is designed to allow the cast to make quick entrances and exits and required very little time spent on scene changes. I particularly enjoyed the early-20th-Century photos of Clinton that were projected throughout the show, and his costume design was even more elaborate and layered. This was no small feat, as many of the 30-plus cast members required multiple outfits.

I have to say that my favorite aspects of the show were the supporting performers who created distinct characters, and matched the style that Willson surely intended for his baby. It was almost like watching a live-action Rankin/Bass Christmas special. Whether they were the salesmen in the famous train song “Rock Island” or the townspeople in the equally fun “Shipoopi,” this cast sold it throughout the performance. There are too many names to mention, but of special note are Holly Moss as Zanita Shinn, Whitney Willard as Ethel Toffelmeier, Nick Petrelli as Marcellus, and the four men who made up the quartet: Jon Loya, Christian Klepac, Otis Jeffries, and Cash Maciel.

If you've seen The Music Man, you will appreciate seeing it one more time on a riverboat located on the banks of the Mighty Miss in a real Iowa river city. As I walked down the gangplank after the show, just up river, and as if on cue, there were fireworks lighting up the sky, and the full moon illuminated the glistening river and lighthouse next to the boat. It might be cliché, but I asked myself if this was Heaven. Then I remembered: No. It is uniquely Iowa.

The Music Man runs at the Clinton Area Showboat Theate (311 Riverview Drive, Clinton) through July 3, and more information and tickets are available by calling (563)242-6760 or visiting ClintonShowboat.org.