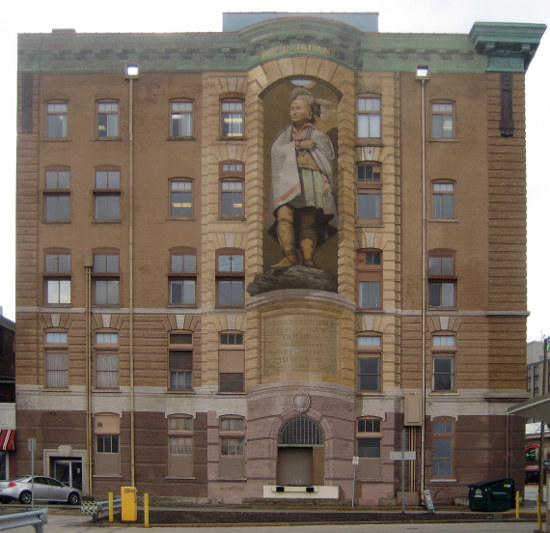 When Bruce de Gouveia Carter died on November 24 at age 66, he left the Quad Cities art community with a gaping hole. He was a visual artist, a teacher, and an art-store manager. But his largest legacy to the arts community was as a tireless promoter - for more than two decades giving artists of all stripes a forum to discuss their work on his Art Talks radio program on Augsustana College's WVIK and, earlier, St. Ambrose University's KALA. Guests in recent months included mostly visual artists, or course, but also a chef, leaders of the Downtown Davenport Partnership, members of the Bucktown Revue and the Prenzie Players, and a poet. His show was omnivorous in the best possible sense. (WVIK will host a special memorial program for Carter at 7 p.m. on January 15.)

He also wrote art reviews for the River Cities' Reader from 2006 to 2008, and his writing displayed curiosity, openness, insight, intelligence, wide-ranging knowledge, and generosity. That rare combination, presented in approachable yet smart and eloquent prose, amounted to unspoken encouragement to readers: He made you want to visit each show, because he discovered and articulated how the work spoke to him. Like the best critics, he wasn't judging so much as honestly seeing and digesting the art.

College Collage: Student Artists of the "2014 College Invitational," Opening November 8 at the Figge For the seventh year in a row, Davenport's Figge Art Museum will host its College Invitational exhibition, a celebration of visual artwork by students from area institutions Ashford University, Augustana College, Black Hawk College, Knox College, Monmouth College, St. Ambrose University, Scott Community College, the University of Iowa, and Western Illinois University. Works were selected by the art professors from each of the participating schools, and 58 individual pieces will be on display between November 8 and February 8.

As Figge Director of Education Melissa Mohr states, the 2014 College Invitational "showcases the creativity and skill of local art students, and demonstrates the dedication of our arts programs in encouraging young artists to innovate early on in their artistic careers." Seven of the exhibit's invited artists, meanwhile, agreed to share some thoughts on their works, their histories, and their passion for art - everything from biblical inspiration to payment in sweets to the internals of a really gross tomato. Art in Plain Sight: The Arsenal and Wells Fargo Clocks The impressive clocks atop the Rock Island Clock Tower building (at the western point of Arsenal Island) and the Wells Fargo building (at 201 West Third Street in Davenport) are highly visible landmarks - day or night. From a distance, the clocks appear to be about the size of a full moon - and, like the moon, are viewed against the sky.

The message conveyed by the height, location, and longevity of these towers is that the institutions associated with them are of great importance to our community. Gazing upward to read the time forces us to look up to these institutions. When you first walk in the doors of downtown Davenport's recently opened Hot Glass art studio, there are a few things you might notice right off the bat.

Initially, your eye is drawn to the vibrant splashes of color on the shelving units to the left: multi-hued glass bowls, vases, and paperweights, all located beneath a striking, meticulously assembled, golden glass chandelier that wouldn't look out of place in the ballroom of Beauty & the Beast.

To your right, you see much of the studio's equipment: a workbench and containers of colored glass and a pair of sizable furnaces, one of whose indicators reveals its interior temperature to be just over 2,300 degrees.

On the opposite side of the studio, through the windows facing River Drive, you're treated to a view of Modern Woodmen Park so picture-perfect that the ballpark should consider using it on souvenir postcards. (Hot Glass is located at 104 Western Avenue, in the rear of the Davenport Printing Company facility.)

But if you turn around and face the direction you came in, you'll find what is the most beautiful sight in the entire studio, at least for Hot Glass Executive Director Joel Ryser and his co-founder son Logan: a large sign on the wall listing the names of local organizations, businesses, and individuals who provided the money, equipment, and experience necessary to make their dream studio a reality. Cadence of Diversity is a joyful mural - rich with expressions of many cultures that are balanced with an underlying theme of connectedness.

The 100-foot-long mural is painted on a concrete wall just south of Seventh Avenue on 38th Street in Rock Island. Working with more than 50 Augustana students, Peter Xiao - a professor of art at the college - led the mural's development and execution throughout much of 2009, completing the work in the spring of 2010.

Art in Plain Sight: Blues Brothers and "Watching the Ferry" On May 2, the life-sized sculptures of the Blues Brothers were back on public display in the Rock Island District after months of storage and repairs. The sculptures are seated in chairs near the corner of Second Avenue and 18th Street.

On the same day, Watching the Ferry - a sculpture of two boys seated on a park bench - was unveiled at its new site in Davenport's Lindsay Park near the riverfront. This sculpture had been out of public view for five years, since its removal from near the Iowa American Water treatment plant when construction began on a floodwall.

Although the timing was a coincidence, the two sculptures share some similarities. Both depict two young men seated side-by-side and convey a sense of camaraderie. Both look to a past associated with the Quad Cities. Both are based on works in other media: television and film with the Blues Brothers and a lithograph with Watching the Ferry.

A comparison between the two pieces is intriguing because of this difference in their sources - as well as in their attitudes, materials, and locations.